The PAPP Strikes Back 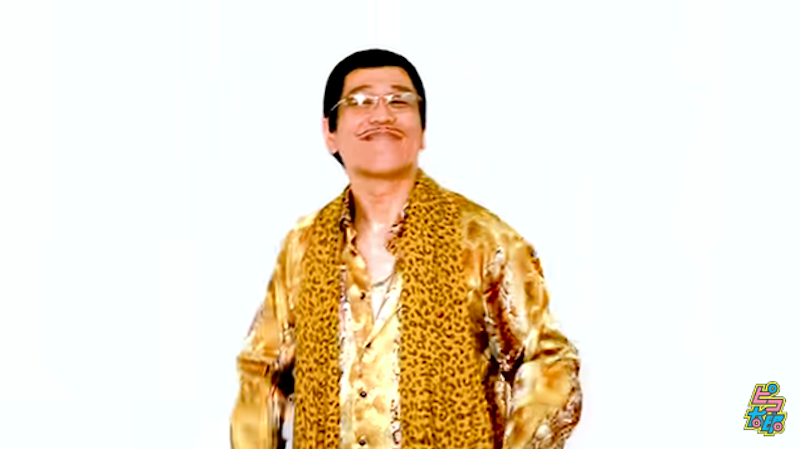 The PAPP Strikes Back

Looking back, 2016 was a dark, dark time. We were crushed by the deaths of both Prince and David Bowie, numerous nations right across the globe turned towards right wing populism, and North Korea began slinging missiles in the air. But here in Japan, it could be argued that on both a personal and professional level, things for English language teachers things could not get any worse, as many of us were shown up as the ineffectual nincompoops that we are. Because, after all those years trying and failing to get our students to understand the simple premise of SVO, and the battles we fought over the correct implementation of indefinite articles, suddenly, in one fell swoop, a song came along that taught those basics, and it worked. With just two basic sentences our students finally got it, and it was no thanks to us. Those sentences?

I have a pen. I have an apple.

Yes, back in 2016, comedian PIKO TARO ruled the internet, and with his insane(ly catchy) song PPAP his popularity exploded as he was championed by a wide array of ‘A’ List celebrities, not least the teen heartthrob/tattooed doucebag (delete as you feel appropriate) Justin Bieber.

Fortunately his celebrity was short lived, and soon the leopard print was gone, and PIKO TARO went back to being regular Daimaou Kosaka, appearing on variety TV shows and the like. Educators sighed with relief and resumed battle with their grammatical frustrations.

However, like a secondary viral spike, PIKO TARO is back. This time, however, he isn’t talking us through strange fruit/stationary hybrids, but instead he is using his creepy charm and global fame to take on the Corona Virus with PPAP-2020.

The video begins with PIKO TARO in familiar leopard skin-pattern gettup, as that all too familiar 8-bit melody cranks into motion, and those who are particularly susceptible to earworms may start to be feeling flashbacks of those dark days from four years ago, as once again we are told that PIKO TARO has a… hand.

Okay, cool. Yeah, we all need to be more vigilant in the handwashing stakes. Good on you PIKO. But then, as laudable an idea this all is, you start to think three things:

a) By comparison the original PPAP wasn’t too bad.
b) I reckon I’ll probably just stick to singing Happy Birthday twice, and the copyright holders be damned.
c) As Tina Turner so very nearly said, ‘What’s PPAP gotta do with it?’

But just then, when you think we’re all done and dusted, PIKO pulls the message out of the bag. ‘Cleeeeaaan hand,’ he intones, teasingly. ‘Cleeeeeeaaaaan hand’, he continues, knowing that he’s got us right where he wants us: in the palm of those clean hands. ‘Ugh!’ he slaps those palms together in a simpering display of piety before intoning into the camera: ‘Pray for People And Peace’.

And there it is: your PPAP has arrived (conveniently forgetting that ‘for’ is also a word and it should, therefore, actually be PFPAP), and after a bit more Famicom-flavoured beats followed by a message instructing us that ‘We Will Win’, that’s it.

So, really, what’s the point? Is it a cynical attempt to gain a crap load of YouTube hits (more than eight million at the time of publication)? Is it a genuine attempt to drag Japan kicking and screaming into the battle against COVID-19 it seems so desperately reluctant to join? Or is it just a harmless bit of fluff that might brighten up your day in these stressful times, while giving hack journalists a bit of content to write about that isn’t mask shortages or Tiger King? I’ll leave it to you to decide.

But whatever it is, you English teachers out there can probably relax, because by the time the kids go back to school PIKO TARO will, once again, be long forgotten.