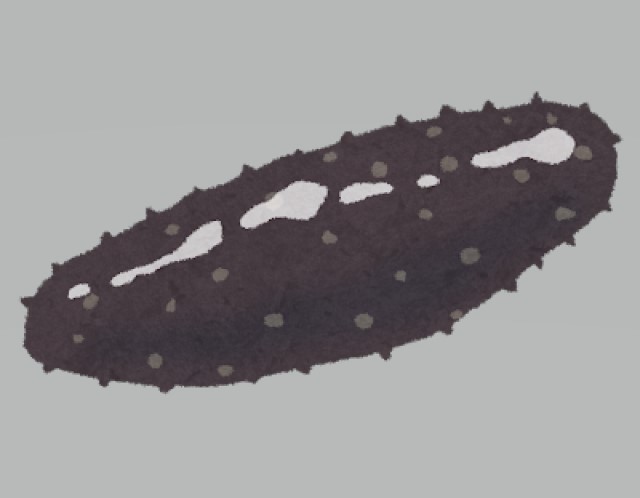 A surprisingly growing problem in Japan has been the poaching of those gelatinous-looking echinoderms sea cucumbers. While they may not be much to look at, these creatures can fetch a fair price on the black market for their use in cuisine and holistic medicine.

▼ People really seem to enjoy the squishy-but-crunchy texture of them.

This, combined with the relatively lax regulation on their fishing and export, make them an ideal low-risk-high-yield target for yakuza fishermen, who are not only a real thing, but fairly common if the number of arrests over the years are any indication.

However, in the early morning of 8 July the Rumoi Coast Guard in Hokkaido uncovered a unique sea cucumber heist, not only in its scale but in the perpetrators involved. Having received a tip that poaching may have been going on off the coast of Tomamae, Hokkaido, the Coast Guard were out on patrol when they spotted an inflatable raft with an outboard motor.

By the time the small craft made it to shore, officers were already waiting for its captain. All in all they rounded up 11 people who were well equipped with diving gear, submersible machines, and cars. They also had 688.3 kilograms (1,500 pounds) of sea cucumbers in their possession with a street value of about 2.2 million yen (US$20,000).

▼ News report showing all the equipment and sea cucumbers seized

The men involved in this crime, however, were not yakuza members but residents of various cities such as Sapporo and Otaru with different levels of employment and ages ranging from 19 to 53. They were all said to have been previously acquainted with each other and share a knowledge of the area. During the theft they were all stationed in different positions from lookout posts to transportation to actual sea cucumber plucking.

The investigation is still ongoing, however, and links to organized crime may be uncovered later on. The authorities still need to confirm that this group was planning to smuggle the sea creatures outside of the country. Preliminary charges have been pressed but the details haven’t been disclosed while the investigation is ongoing.

▼ They may have just wanted to make a bunch of key chains.

One member in particular may escape the full force of the law though, because at the age of 19 he is still considered a minor. If this arrest were to have taken place the same time next year, when the age of adulthood is lowered to 18, it would be a very different outcome.

While it’s still possible this crew were recruited by yakuza henchmen sick of waking up early to go jump in the ocean themselves, it’s also likely they just heard about the money that could be made and decided band together for one big score of their own.

While that admittedly could make for a whimsical indie film plot, the fact is that these increasingly gigantic hauls of sea cucumbers must be endangering their populations and need to be curbed as soon as possible.