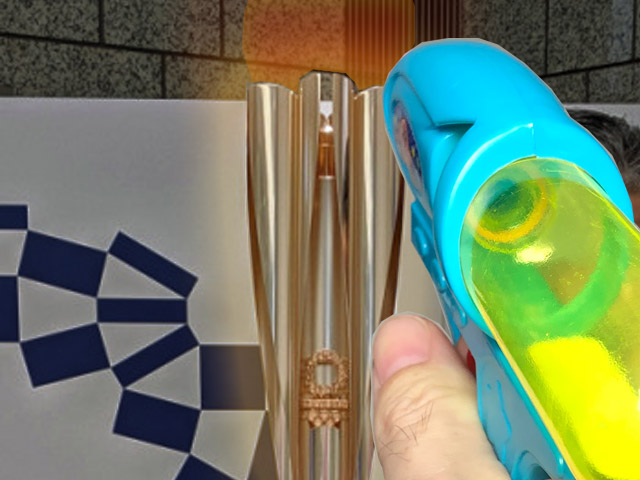 And not just any water gun; it was a Fancy & Toy Tonari.

It’s getting hard to believe that the 2020 Tokyo Olympics are only a few weeks away – mainly because it’s 2021 now. But despite a global pandemic and widespread public opposition to the event itself, the Games will indeed go on.

And right on schedule, the torch run passed through the northern prefecture of Ibaraki on 4 and 5 July. However, during a leg in Ibaraki’s capital, Mito City, a brazen attempt on the torch’s flame was made. The entire incident was caught on video.

According to police, the woman shouted out “Olympic opposition! Stop the Olympics!” and began firing her weapon at the torch’s flame as it passed by. The runner’s security detail were well prepared, however, and even had these cool little arm shields to help repel the attack before restraining her until the police came to make the arrest for obstruction of business.

The suspect is said to be a 53-year-old woman from nearby Hitachi City. She was armed with a Fancy & Toy Tonari Splash Water Gun that boasts a five-meter (16-foot) range, 130-cubic-centimeter (4.4-fluid-ounce) clip, snubnosed 21-centimeter (8-inch) design ideal for concealed carry, and four colors of which she allegedly chose pink. 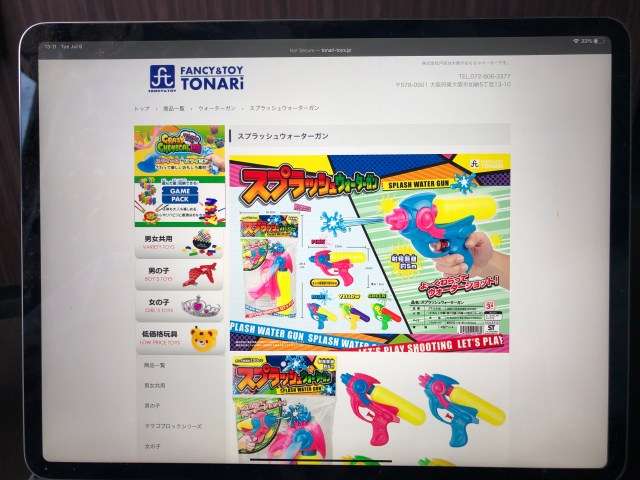 Feelings about the incident were mixed online. Many people agreed with the fundamental point the suspect was trying to make, but some felt she could have gone about it a better way. After all, harassing a torch runner in this way to oppose the Olympics is a bit like throwing ketchup at the menu at McDonald’s because you disapprove of the company’s contribution to deforestation.

“It was a crime of conscience the likes of which have not been seen in recent years.”
“So if the torch was extinguished then they cancel the Olympics? That’s how it works?”
“If you got something to say, just make a sign.”
“Even if you don’t agree with it, you have to give her some respect for taking action rather than just whining about it online.”
“The torch goes out all the time and there’s constantly a spare fire nearby. This was a pointless act.”
“It feels about a step away from terrorism. Who knows what could have been in that gun?”
“The guards were right on top of her in about three seconds though. Good to see they’re doing their job.”
“She got the runner a little wet though. He might catch a cold now.”

Indeed, it was an irresponsible act, no matter what the reasoning behind it. And interfering a man who just wanted to live out his once-in-a-lifetime chance to run with the Olympic torch is a rather selfish and ineffective way to make your voice heard.

Furthermore, I worry that the politicians in Tokyo might enact stricter water gun laws in the wake of this incident, such as by raising the legal age of ownership to five years old. In anticipation of this, I ran down to my local 100-yen store and bought out their entire stock. If the powers-that-be ever try coming for them, they better be ready to get super soaked.

▼ I always aim for the socks, and my boy Kirby doesn’t miss. 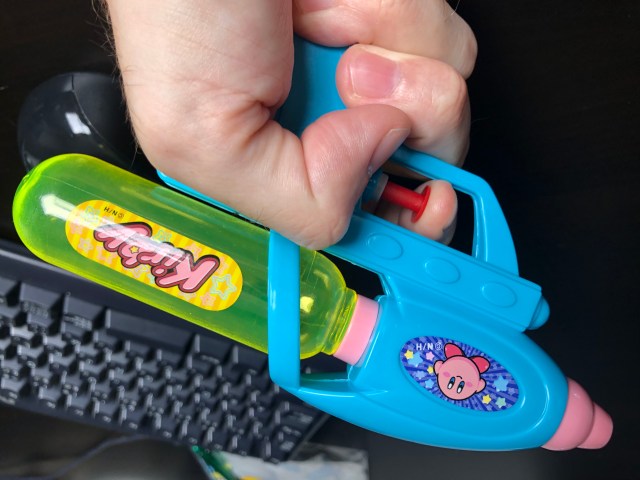 Hopefully it doesn’t come to that, and when this is all said and done we can remember that water guns don’t terrorize public events, people do.