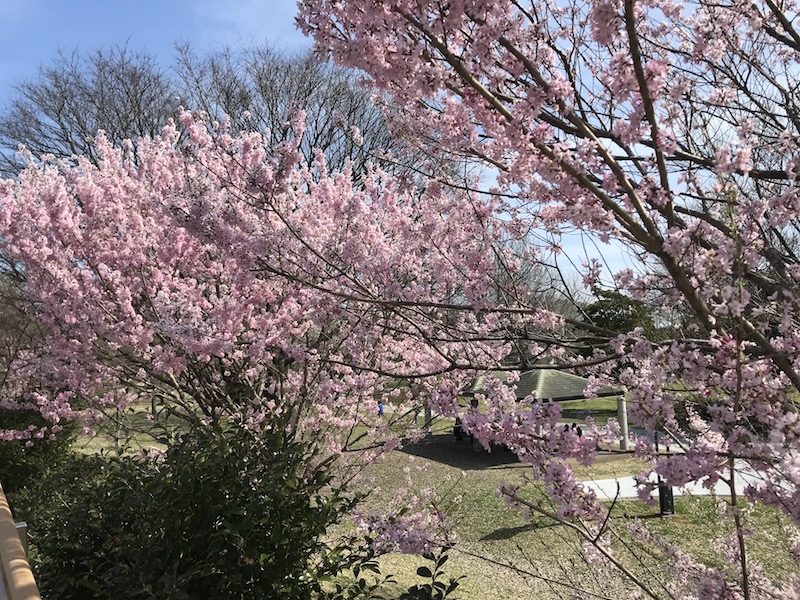 When Andy Williams sang of Christmas that It’s the Most Wonderful Time of the Year, he was talking out of his backside. And not just because Christmas is a bloody nightmare (bah humbug, and all that) but because the most wonderful time of the year in Nagoya is spring. Yes, you can keep your ‘marshmallows for toasting’ and ‘much mistltoeing’, nothing beats the time when the cherry blossoms bloom and we gather with friends, families and co-workers to eat, drink and be merry, not under the fir tree, but the sakura. Oh, there’s nothing quite like a hanami party.

However, these are strange times in which we are now living, and in order to slow the further outbreak of the COVID-19 virus, hanami has been cancelled. If you have visited a park over the past few days, you may have seen signs like this one below, that basically say that it’s okay to wander around and enjoy the cherry blossoms, but gathering in large groups, eating and getting drunk is a big no-no. For the most part these have been adhered to, but with restricted access to Nagoya’s amazing sakura spots – from Meijo Koen to Tsurumai Koen to Yamazaki River – depriving us of this great time to hang out together, particularly if this is your first time to experience the season, it’s a bit of a bummer. Yes, in the grand scheme of things it’s not exactly the end of the world, and many people out there are dealing with far greater issues. But hey, it’s still okay to be a bit gutted about it. 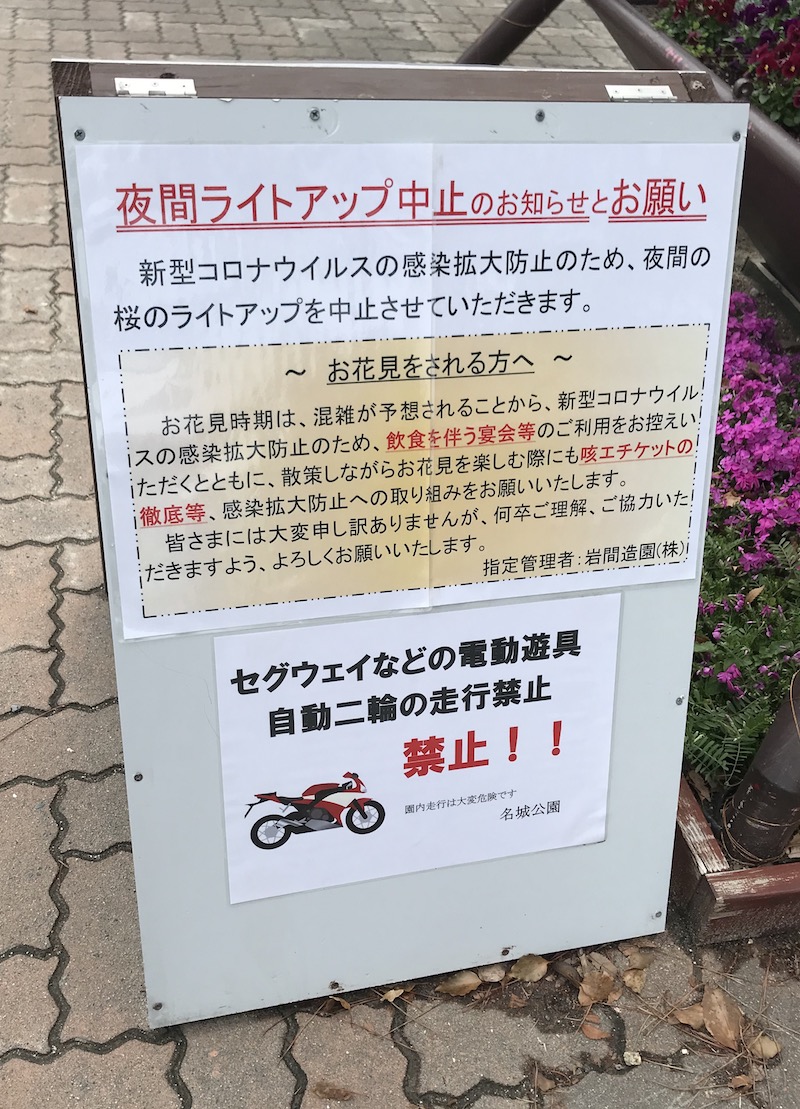 Though with that said, seeing how things are unfolding around the world, we shou be more socially responsible (and I’m especially talking to you, the big group of gaijin I saw in Meijo Koen on Sunday, ignoring the signs and getting trollied). However, that doesn’t mean that we have to give up on the celebrations altogether. We’ve just got to get a bit more creative about it. It’s time for some HanaOnNomi.

Yes, I know what you’re thinking. HanaOnNomi? Sounds like some new bubble tea shop in Osu. But no. It’s actually a phrase that I have part coined and part pilfered from a craze that is currently being enjoyed by some of the more responsible folks in Japan in these worrying times (and yes, despite all evidence to the contrary, they are out there). OnNomi [オン飲み] comes from ONline and NOMImasu [drink] and is basically people getting together to booze up on social networking platforms. You’ve probably seen friends back home in lockdown doing similar things, but even though bars and restaurants are still open here (at the time of writing, though who knows what’ll happen the moment I press ‘publish’), some Japanese are taking it upon themselves to be prepared. So why don’t you?

What you need for your own HanaOnNomi

For starters, you’ll need some mates with whom to drink, but that’s generally not a problem for you, right? You’re all cool guys and gals out there in Nagland, aren’t you. Oh, you’ve just arrived and haven’t met anyone yet? Well I’m sure that’s no problem. There are loads of social groups and forums out there for you to drum up some new pals – heck, why not drop a line in the comments for this article and see who’s keen? Just be careful about who you get chatting with as there are some weird folks out there on them internets. But you don’t need me to tell you that.

So, you’ve got your mates lined up, now all you have to do is get them all in one (cyber)space. Fortunately, right now there are absolutely tonnes of video conferencing apps for your phone, tablet or iPod, many of which are free to download. In fact, it’s probably one of the only boom industries in this ‘new normal’ world in which we are living. 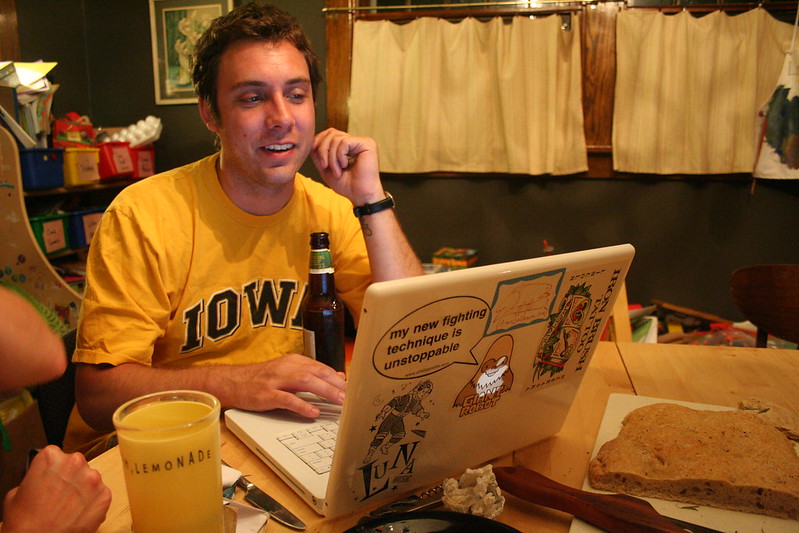 The one that has proven most popular so far is Zoom, which is available for both IOS or android and can host up to 100 people. Then there is good old Skype, which holds up to 50, and for smaller gatherings of up to eight you could use Houseparty, which gives you the option to play games and quizzes if the conversation starts to lull.

At the start of this OmNomi craze, people thought it was oh so hilarious to drink bottles of Corona, but as the worldwide death toll rises, that’s starting to look a little less funny. Besides, it’s a crap beer. Now, of course you could just pop to the conbini and pick up snacks and cans, but hey, this is a party. Why not get some decent stuff and also help out your local community?

Craft beer specialists Hopbuds are currently still open for takeaway and have the largest selection of fancy suds in the city. On the grub side of things, Coat of Arms has an extensive menu for takeaway including their steaks and burgers, and there is talk of a 20 percent off campaign for many items on the menu, while Midtown BBQ are doing delivery and takeaway on both their food and draft craft beer through Uber Eats. And vegans and veggies need not be left out of the party, because Queen’s Healthy Diner also does takeaway pizza, karaage and their frankly amazing burritos (just make sure you give them a call beforehand). And if those options don’t float your boat, why not just pop down to your favourite hole-in-the-wall yakitori or izakaya with a Tupperware box and ask nicely. They may be happy for the business. 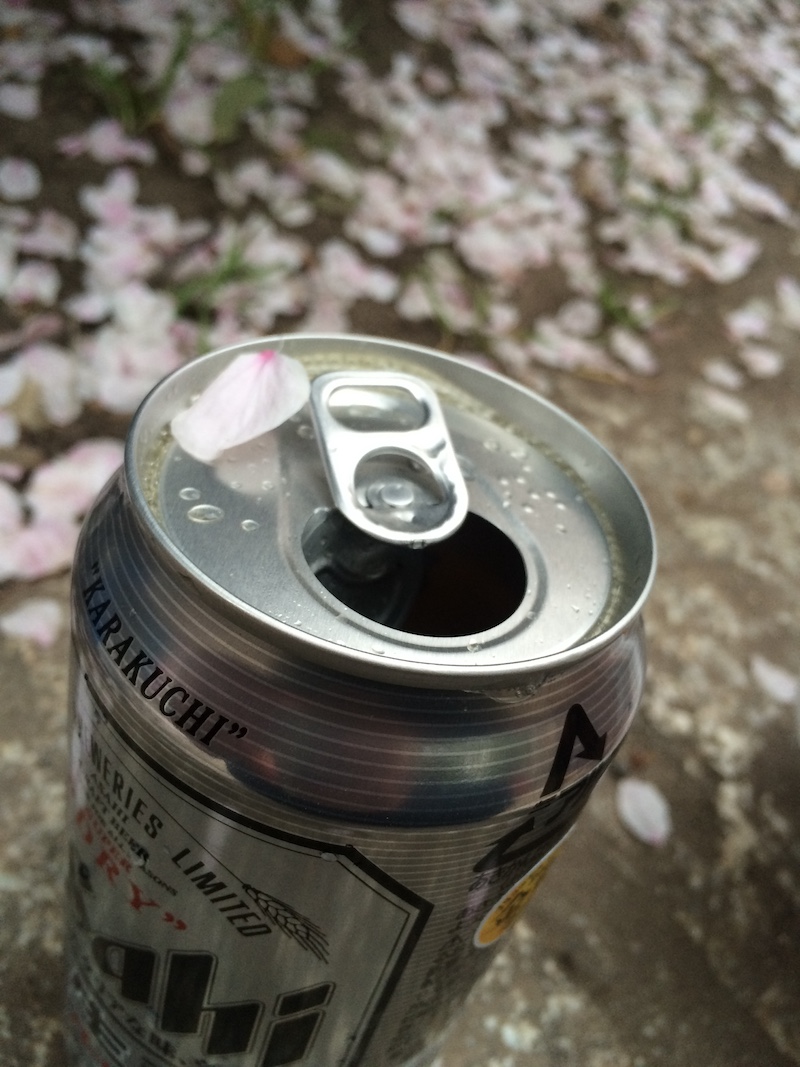 Right there you’ve got all the ingredients for an amazing HanaOnNomi party, so just because you’re being socially responsible it doesn’t mean that you can’t have fun too. Next grab a pot plant (it needn’t be sakura, any flower will do) or even just wear something pink, and get stuck in.

Image: By richie graham via flickr.com [CC BY 2.0] – Modified
Images: By Mark Guthrie